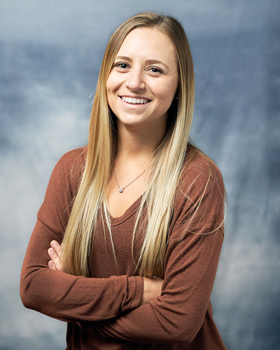 Sydnie grew up in the local area and attended Liberty High School. She found an early passion for staying active outdoors and with sports, including soccer, gymnastics and snowboarding. Sydnie attended college at UC Davis where she graduated with a B.S. in Neurobiology, Physiology and Behavior and a minor in Psychology. She had the honor of working at Kabat and Associates PT previously as a technician before becoming a physical therapist. In 2021, Sydnie earned her Doctorate of Physical Therapy from University of the Pacific where she had the privilege of working with the San Francisco Giants.

While Sydnie always knew she wanted to pursue a career in the medical field, her drive to be a physical therapist came after injuring her own knee and having to go through physical therapy herself. She wants to help people take an active role in improving function and living a healthy lifestyle. In her free time, Sydnie enjoys spending time outdoors, hanging out with her close friends and traveling.